The long awaited third Quartermaster print (“Supporting Victory” and “Lifeline to Victory” were the first two) was unveiled June 16th, 1999 during the Quartermaster Foundation dinner during Regimental Week at Fort Lee, Virginia. Renowned Civil War artist Don Stivers was commissioned to create a print depicting Union Army Quartermasters in East Tennessee in the fall of 1863 as they worked to open a desperately needed supply route – the so-called “Cracker Line” – for thousands of besieged troops at Chattanooga.

This particular event was just one of many instances during the course of the war where Quartermaster supply turned the tide, and made success on the battlefield possible. Because of its stirring nature, and the place it holds in Quartermaster history, this latest print promises to be very popular. Only 500 of the Limited Edition set are reserved for the Quartermaster Regiment, and will feature the regimental crest on the print. The cost for each print is $150.00 (plus $20 shipping).

Proceeds from the sale of this print will be used to support the U.S. Army Quartermaster Museum at Fort Lee, Virginia. 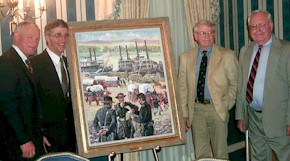 After both sides suffered appalling casualties at  the Battle of Chickamauga in north Georgia, in mid-September 1863, the Union Army of the Cumberland under Major General William S. Rosecrans retreated to Chattanooga for protection. General Braxton Bragg’s Confederate forces followed suit, took control of the mountains surrounding Chattanooga (including Lookout Mountain), blocked all major roads and railways leading to the city, and virtually terminated all traffic on the Tennessee River. Instead of a safe haven, Chattanooga became a death trap. For the next six weeks Union wounded went without medical supplies, thousands of animals perished, rations and ammunition supplies dwindled to perilously low levels. An entire Union army, in danger of being captured, teetered on the brink of disaster.

Union troops under new command by the end of October launched a daring counterattack driving Confederates from their mountain strongholds. It was the moment Colonel William G. LeDuc, QMC, had been waiting for. He and another Quartermaster, Captain Arthur Edwards, launched their homemade steamboat CHATANNOOGA on her maiden voyage from Bridgeport upriver to a place called Kelley’s Ferry – opening the “Cracker Line.” The siege was broken. More vessels followed in the weeks and months ahead, including one carrying General William T. Sherman as he made ready for his march through Georgia. The print depicts Sherman (center), LeDuc, and Edwards at Kelley’s Ferry with the masses of supplies being transferred from ships to wagons en route to Chattanooga.

Go to The Little Steamboat that opened the “Cracker Line” for more historical details.

These limited edition, numbered prints will be issued on a first come, first served basis. Use the form below to reserve your print. Don’t delay as the limited edition is expected to sell out quickly.