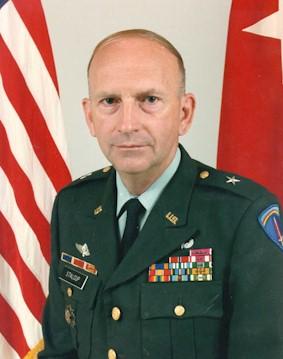 General Stalcup was born in Butler, Tennessee, on 3 February 1935, and earned a Bachelor’s Degree in Business Administration from East Tennessee State University. Commissioned a Second Lieutenant in 1958, he served over 30 years as an active duty officer, until his retirement in September 1989.

General Stalcup has demonstrated time and again expert leadership and in-depth technical capability in virtually all Quartermaster mission areas: petroleum, aerial delivery, supply policy and operations, maintenance procedures, and theater wholesale logistics. He is widely credited with having bolstered Army combat readiness – by promoting a “new way of doing logistics business.” In so doing he also greatly enhanced the reputation of the Quartermaster Corps.