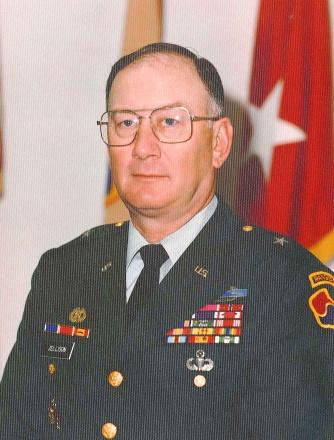 Brigadier General Joe Jellison was commissioned through OCS into the Infantry in 1962.  His first assignment was to the U.S. Army Training Center, Fort Polk, where he served consecutively as a Platoon Leader, Operations Officer, and Training Officer.  In November 1963, he deployed to Korea where he served as Aide-de-Camp to the Chief of Staff, Headquarters, I Corps, and Eighth United States Army.  Upon returning stateside, he was assigned to the Infantry School at Fort Benning, where he served as an Instructor, a Training Officer, and Commander, 1st Ranger Company, 1st Student Battalion, Eglin Air Force Base.  Upon completion of the Infantry Officer Advanced Course, he deployed to Viet Nam where he commanded HHC and later Company C, 2nd Battalion (Airborne), 503d Infantry, 173d Airborne Brigade.  In March 1970, having completed studies at the Viet Nam Training Center, Foreign Service Institute, Washington, DC, he returned to Viet Nam as S-3 Advisor, Advisory Team 84, U.S. Army Military Assistance Command.  In December of 1970, he was wounded and evacuated to the U.S. Army Hospital at Fort Rucker, Alabama.

Upon promotion to Brigadier General, General Jellison was assigned to consecutive tours in the Republic of Korea – Commanding General, 19th Support Command, Eighth US Army, and Chief, Joint US Military Assistance Group, Korea.  During his four years in Korea, he was instrumental in assisting the Korean Armed Forces to modernize their combat formations as well as their own support structure thereby reducing reliance on the United States.  Furthermore, he had a pivotal role in convincing the Korean Government to provide greater levels of host nation support to reinforcing US combat formations.  His final assignment was as Deputy Director and Assistant for Maintenance Management, Office of the Deputy Chief of Staff for Logistics, US Army.