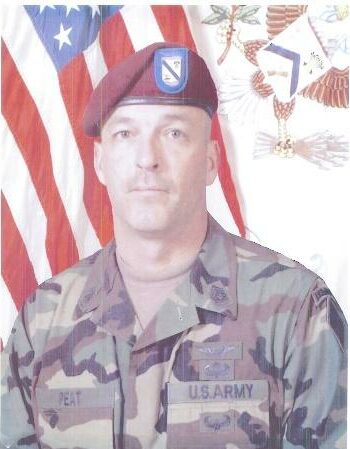 CSM Peat began his career as a supply specialist in numerous combat arms units including the 75th Infantry Regiment (Ranger), the 8th Infantry Division, 3rd  Infantry Division (Mechanized}, and the 1st Infantry Division (Mountain). In his formative years he held leadership positions at every level including Unit Supply Sergeant, Squad Leader and Platoon Sergeant. As a senior Noncommissioned Officer, CSM Peat served as a First Sergeant in Headquarters and Headquarters Company, National Training Center Support Battalion at Fort Irwin, California and HHC, 10th Infantry Division (Mountain) Support Command at Fort Drum, New York. In this position he supported actions to stabilize the government of Haiti during Operations Uphold and Restore Democracy. His next tour of duty took him to the rank of Command Sergeant Major serving as the CSM for 548th Corps Support Battalion, 10th Mountain Division at Fort Drum.

In 2001, CSM Peat was selected to be the CSM for the US Army Quartermaster Center and School and the 11th Quartermaster Regimental Sergeant Major. In this vital role he was responsible for the operation of the QM school, running the QM NCO Academy, training and leader development of over 120,000 enlisted Quartermaster Soldiers of the Active Army, Army Reserve and Army National Guard, including proponent for nine Military Occupational Specialties. At the time, QM was the single largest branch in the entire Army. CSM Peat assured the branch stayed healthy, ready and relevant in support of our Warfighters. Following a very successful tour at the QM Center and School, CSM Peat was selected for the 3-star nominative CSM position as the Command Sergeant Major of the United States Army Combined Arms Support Command (CASCOM). In effect, his span of complexity and responsibility more than quadrupled taking on similar proponent responsibilities for the Ordnance, Transportation, Finance, Adjutant General and Chaplain Corps, as well as adjunct coordination responsibility with Aviation Maintenance and the Medical Service Corps. In this post, CSM Peat planned and executed the US Army Soldier and NCO of the year competition. This was the first ever Army – wide competition held at Fort Lee. Additionally, he played a major driving role in preparing sustainment units for modular design and alignment in direct support of Brigade Combat Teams and Support Brigades as the Army underwent sweeping transformation of our warfighting formations. As Command Sergeant Major of CASCOM, he assisted the Commanding General and the Branch Proponents/School Commandants in preparation to execute Base Realignment and Closure 2005 actions, including creation of the Sustainment Center of Excellence and consolidation of all sustainment schools and centers on Fort Lee, Virginia. This included consolidating the programs of instruction for all key NCO leadership courses.  CSM Peat’s unparalleled experience and keen leadership resulted in a very successful inception of the Sustainment Center of Excellence and has had enduring and positive effects on battlefield sustainment functions.