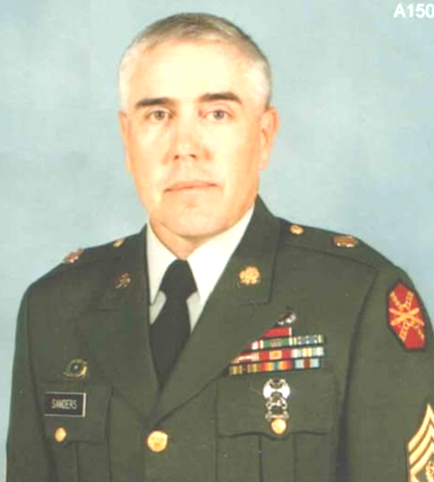 Command Sergeant Major Sanders’ contribution to the Quartermasters Corps is well documented and has set the standard for others to follow. He served in numerous key positions throughout his career always making immediate noticeable impact for those he led and served. Serving as the Command Sergeant Major of the 702nd Main Support Battalion, 2nd Infantry Division, he led a reformation of the individual Soldier training program that resulted in first sergeants focusing on the wartime missions and needs of their Soldiers to accomplish those missions. He identified and took corrective action on the issue of Soldiers not being recognized at the completion of their tours.

His personal efforts resulted with improvement of the presentation of “on time” awards improving from 85 to 99 percent. His actions resulted in unit morale reaching an all-time high. He served as the Command Sergeant Major of the 10th Area Support Group in Okinawa, Japan. As the senior U.S. Army Non-Commissioned Officer, he also served as the responsible person for the services, security and well-being of all U.S. Army units on the island of Okinawa. Additionally, he served as the Command Sergeant Major of the 23rd Area Support Group. Because of exceptional performance, he was selected to serve as the Command Sergeant Major of the 19th Theater Support Command. While serving in that position, he initiated an exchange program between personnel from Korea and Japan which resulted in increased appreciation and understanding between forces stationed in the region. He was selected to serve as the first Command Sergeant Major of the newly formed Installation Management Agency Korea Region. This organization managed over 7,000 employees, contractors, and Soldiers tasked to provide safety, health and welfare, morale, security, and supporting services on 81 separate posts, camps, and stations throughout South Korea. He was a key player in the development of the first elementary school grade K-6 in country. His leadership style became the standard for other leaders to emulate and became the bar for younger Soldiers to strive to achieve.