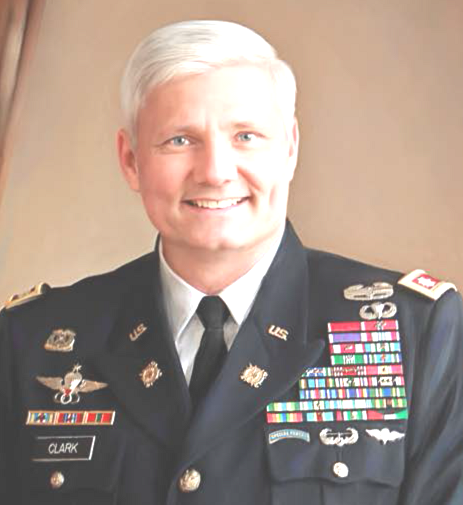 Lieutenant Colonel Clark served in numerous tactical assignments as a Special Forces qualified Alpha Detachment Member and as a senior logistics officer. His overseas assignments include Kuwait, Saudi Arabia, and Iraq. He served for over 43 months in combat operations as a Forward Support Company Commander, Battalion Commander and Executive Officer of a Special Troops Battalion and Executive Officer for the 1st Sustainment Command (Theater). He served as a Senior Staff Coordinator on the Joint Staff and Army Staff as well as the J-5 Chief of Plans for the Iraq Assistance Group. During Lieutenant Colonel Clark’s career, he has served in a variety of multifunctional logistics positions and performed all his duties in a distinguished and exemplary manner. LTC Clark also earned the distinction as a Distinguished Demonstrated Master Logistician from the Society of Logistical Engineers and holds both the Distinguished Order of Saint Martin from the Association of Quartermasters and the General Brehon B. Somervell Medal of Excellence as a distinguished Multi-functional logistician. He is also a Distinguished Member of the Quartermaster Regiment.

After retiring from the United States Army, Lieutenant Colonel Clark served as the Senior Appropriations Advisor for Congressman C.W. Bill Young, Florida 10th District during the 111th – 113th Congress. There Mr. Clark assisted in preparation of proposed legislation by conducting in-depth research into subjects of proposed legislation and developing drafts of proposed bills for the House of Representatives. In June 2014, Mr. Clark assumed the role as the Chief Staff Executive for American Veterans (AMVETS) National Service Foundation and AMVETS Charities Inc. This organization supports Veterans and their Families with services, programs and resources helping them while in uniform and after transitioning from the Armed Forces. AMVETS has been helping Veterans since 1947.