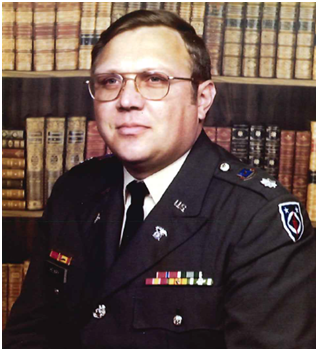 LTC Larry Henry is a graduate of Ohio University’s ROTC Program where he earned a degree in Industrial Engineering. He began his military career as a Second Lieutenant in the Quartermaster Corps in July 1960.  Following duty as the Post Quartermaster at Fort Hancock New Jersey, LTC Henry served as a Company Commander at the United States Army Armor Training Center at Fort Knox.

LTC Henry also commanded the 590th Quartermaster Direct Support Company and the 515th Airborne Detachment (Riggers), 9th Logistics Command in Korat Thailand. His unit provided combat service support to the command dispersed throughout Thailand. Supplies were delivered to isolated radio research units and other customers throughout the theater by rail, truck and airdrop. In addition, rigger support was provided to Special Forces and Air America operating in Thailand and other Southeast Asia locations. LTC Henry was assigned as the assistant Brigade Supply Officer for the 6th Support Battalion, 11th Light Infantry Brigade at Schofield Barracks before becoming the commander of the Maintenance & Supply Company. His unit trained in Hawaii before deploying to Vietnam in time for the “Tet Offensive” in 1968.

In 1970, LTC Henry was selected for another command, the Materiel Management Center, 2nd Support Command, VII Corps in Germany. His unit controlled the materiel management functions for all logistics support to the US Army VII Corps. LTC Henry retired in 1982 having commanded units at Fort Knox, Hawaii, Vietnam, and Germany. For more than nine years, he served in Automated Data Processing assignments and was one of the most knowledgeable officers regarding the fielding, operations, and maintenance of mobile Automated Data Processing systems.