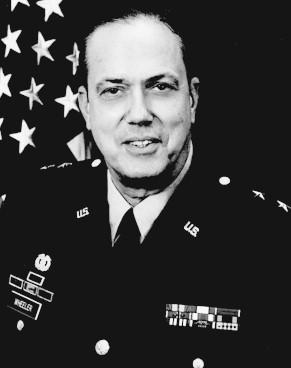 General Wheeler enlisted in the West Virginia National Guard in 1953 and entered active duty in 1959 as a Second Lieutenant in the Quartermaster Corps.  He received his commission through ROTC at Marshall University in Huntington, where he earned a Bachelor’s Degree in Education and English.

Following duty as an Assistant G-1 (Personnel) at Fort Lee, Virginia, he commanded a medium tank company in the 8th Battalion of the 34th Armor at Fort Knox, Kentucky.

General Wheeler served four years in Southeast Asia.  He spent one year in the Republic of Vietnam as plans and operations advisor in the Military Assistance and Advisory Group and later the Military Assistance Command, Vietnam.  He subsequently served three additional years in Vietnam, Laos and Thailand as Special Advisor to the Royal Thai Army for Ground Forces, and as Assistant Chief of Staff, G-4 for the 1st Cavalry Division (Air mobile).

In 1975, General Wheeler received his Master’s Degree in Business Administration from Pepperdine University.  In 1976 he graduated from the Army War College,  then served two years as Division Chief in the Office of the Deputy Chief of Staff for Logistics in the Pentagon.

In July 1978, General Wheeler assumed command of the Division Support Command of the 1st Infantry Division at Fort Riley, Kansas, In March 1980, he became Chief of Staff of the 1st Infantry Division-a virtually unprecedented feat for a Combat Service Support Officer.  He served as Deputy Commander of the Army Logistics Center (now call the Combined Arms Support Command) at Fort Lee, Virginia, in August 1980, and was promoted to Brigadier General in February 1981.

In August 1981, he began a two-year tour as Commander of the Army and Air Force Exchange Service – Europe in Munich, Germany; he also served as the Commander of the Munich military community.

General Wheeler took command of the 2nd Support Command, VII U.S. Corps in December 1983.  At the time it was the largest Support Command in the Army with operations throughout the German states of Bavaria and Baden-Wurttemberg.  In July 1985, he became the Commandant of the Industrial College of the Armed Forces at Fort Lesley J. McNair.  He served in this position for four years, the longest of any commandant in the history of the college.  In September 1989, he became the Deputy Chief of Staff for Personnel, Army Materiel Command.

In July 1991, he became Commander of the Army and Air Force Exchange Service, providing goods and services to the Military Services and their families worldwide in peace and war.  General Wheeler retired in August 1993, with more than 41 years of military service, ending a truly remarkable career as a Quartermaster Soldier.