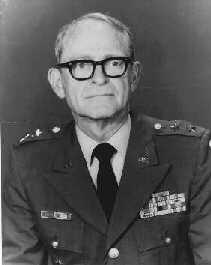 General Welch was born in Hermosa Beach, California on 19 April 1925. After World War II service with the Office of Strategic Services, General Welch was commissioned a Quartermaster Officer upon graduating from Stanford University with a Bachelor of Arts Degree in Economics and Accounting. He also earned a Master of Business Administration degree from Harvard University. His military schooling includes: The United States Army Command and General Staff College, The Armed Forces Staff College, and the United States Army War College.