Back to List
BG Georges F. Doriot
Class of 1996 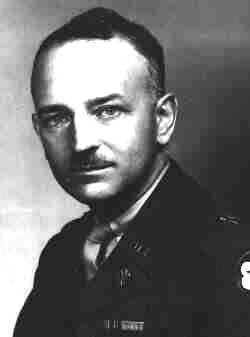 General Doriot was born on September 24, 1899 in Paris, France and died June 2, 1987. He served as an Artillery Officer with the French Army in World War I, then graduated from the University of Paris in 1920. He came to the United States in 1921 and attended the Harvard Business School. In 1926 he became an Assistant Dean and Associate Professor of Industrial Management at Harvard.

In 1940, the same year he became a naturalized citizen, General Doriot was instrumental in creating the Army Industrial College for the US War Department. In 1941, with the backing of a former student, The Quartermaster General, Major General Edmund B. Gregory, he was given a direct appointment to Lieutenant Colonel. He immediately went to work as Chief of the Military Planning Division, Office of the Quartermaster General. Under his direction, many of the country’s best academic researchers, scientists, technologists, and industrial planners were brought together to support the war effort. The Military Planning Division’s unprecedented accomplishments under General Doriot included the development of all new uniforms and equipment for use in every kind of climate and geographic region around the world; a whole family of new field rations (for example, B-, C-, D-, and K-Rations, 5-in-1s, 10-in-1s, Assault and Accessory Packs) along with stoves, food containers, openers, and cook tents for various climates. These planners also pioneered in the development of new plastic items, water-resistant and flameproof fabrics, and many synthetic goods for use in place of precious natural resources.

In 1946, General Doriot, while still at the Office of the Quartermaster General, was instrumental in drafting a blueprint for “The Institute of Man,” a plan to continue the high level of industrial and technological research on behalf of soldiers in the postwar era. This plan came to fruition with the opening of Natick Army Research, Development and Engineering Laboratories in 1954 and continues today as the US Army Soldier Systems Command, Natick, Massachusetts.