Back to List
BG James E. Bickford
Class of 1998 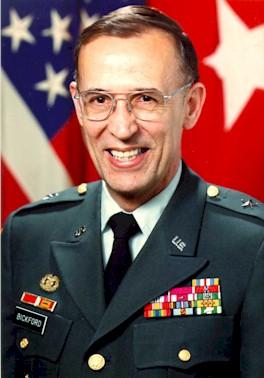 General Bickford was born in Garten, West Virginia, the son of a Coal Miner/Store Manager.  He was commissioned Second Lieutenant in the Infantry after graduation from Eastern Kentucky University in 1959.  After the Infantry Officer’s Basic Course he was assigned to Fort Knox, Kentucky, were he served as a Platoon Leader and Company Commander. In 1961, he was assigned to the 308th Quartermaster Battalion in Giessen, Germany where he commanded Alpha Company.

Early in his career, General Bickford established his credentials as a first-rate Petroleum Officer and went on to hold key command and staff assignments at every level. As a Captain in Vietnam, he was the first petroleum officer assigned to the 1st Logistical Command and developed the first overall petroleum support plan for US troops in Southeast Asia. As a major, he played a pivotal role in high-level negotiations concerning US military petroleum interests in France. He later served a second tour in Vietnam as a Military Assistance Command Vietnam Petroleum Staff Officer.

He was selected in 1976 to command the Petroleum Distribution Command, Korea which operated and maintained a 300 mile pipeline. From 1984 to 1986 he commanded the 47th Area Support Group in Burtonwood, England. At Burtonwood, his unit’s mission was to maintain and be prepared to ship war reserve materials to central Europe in time of war. In 1986, he took command of the 200th Theater Army Materiel Management Center in Zweibrucken, Germany. In his last assignment before retirement in 1991, he commanded the Defense Fuel Supply Center, which oversaw the acquisition, storage and distribution of all fuel for US forces worldwide-including the immensely successful fuel support provided during Operation Desert Storm.

Brigadier General Bickford died on October 25, 2002 at the age of 65 after a battle with cancer.