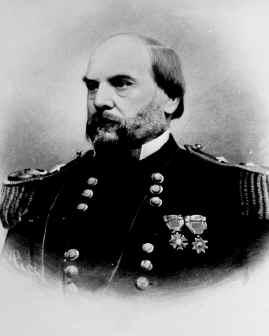 General Rufus Ingalls was born at Denmark, Oxford County, Maine on August 23, 1819. He was appointed to the U.S. Military Academy in 1839, and entered it with a remarkable class that included President Grant and others.

After he graduated in 1843 he was assigned to the newly raised regiment, the U.S. Rifles. He served with his regiment at Leavenworth, Kansas and at Fort Jesup, Louisiana, until March, l845, when he was assigned to the 1st Dragoons (Infantry).  He participated in the war with Mexico with his regiment and soon distinguished himself in action at the skirmish at Eabudo and conflict at Pueblo de Taos, for which he received the brevet rank of First Lieutenant. After the war he served as Quartermaster with troops sent by ship to California, serving at Monterey, Los Angeles, etc.  He was selected as Captain and Assistant Quartermaster on the recommendation of General Jesup, the Quartermaster General. He was soon after assigned to duty at Fort Vancouver.

General Jesup selected then Captain Ingalls to accompany the pioneer expedition by Colonel Steptoe’s in its march overland across the continent, from Leavenworth to Benicia, California (1854-55). He then went to Vancouver as member of a commission to settle the Indian war claims of Oregon.

After the war General Ingalls served at the headquarters in Washington, then as Depot Quartermaster at New York, San Francisco and Chicago, and finally was appointed Quartermaster General on February 23, 1882, retiring at his own request after forty years service, July 1, 1883.  Upon retirement he made his home in Oregon, then moved to New York City in 1891.

General Ingalls died in New York City on January 15, 1893, at the age of 73.  He was buried with military honors at Arlington National Cemetery.