Back to List
BG William Fedorochko, Jr
Class of 2014 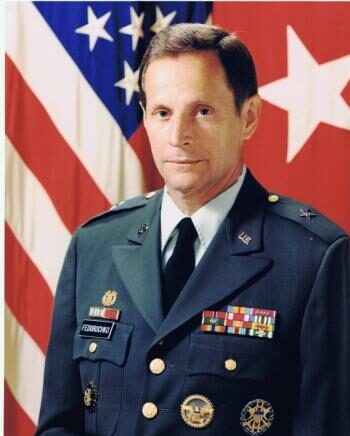 Brigadier General Fedorochko was commissioned into the Regular Army in 1962 as a Distinguished Military Graduate of Washington & Jefferson College.  Having been commissioned into the Quartermaster Corps, he was placed in a two-year detail to Armor.  Following the Armor Officer Basic Course, he was assigned to U.S. Army Europe in the 14th Armored Cavalry Regiment as a Reconnaissance Platoon Leader and subsequently a Special Weapons & War Plans Officer.  Following his detail, he joined the 6th Quartermaster Group where he served as the project officer for establishing the V Corps Support Brigade.  Returning to Fort Lee in 1965, he served as S-3, 528th Quartermaster Battalion and subsequently commanded the 135th Quartermaster Company (Supply Depot) where he activated and trained units for deployment to the Republic of Viet Nam (RVN).  In 1967 he was assigned as a Logistics Force Development Officer in Headquarters, 1st Logistics Command, Republic of Vietnam.  Upon returning stateside, he became an ROTC instructor at the University of Pittsburgh where he earned a Masters Degree in Economics.  This degree influenced his second assignment in Viet Nam when General John Wickham personally selected him to develop programs for Military Assistance Command, Viet Nam (MACV) to further US military-economic objectives that were subsequently approved by the Commander, MACV, and the Secretary of Defense.

Upon returning stateside, he graduated with honors from the United States Army Command and General Staff College.  Following graduation, he was assigned as a Procurement Staff Officer in the Office of the Deputy Chief of Staff for Research, Development, and Acquisition, Headquarters, Department of the Army.

Upon promotion to Brigadier General, he served as Special Assistant to the Under Secretary and Deputy Director for Program Innovation.  He played a key role in developing the Defense Management Report that DoD submitted to the President, and he developed policies and procedures that were contained in DoD 5000-series regulations signed by Deputy Secretary of Defense.  His final assignment was Deputy Director for Force Structure & Resources, J8, the Joint Staff where he developed strategies, plans, and programs enabling the accomplishment of US national military objectives.