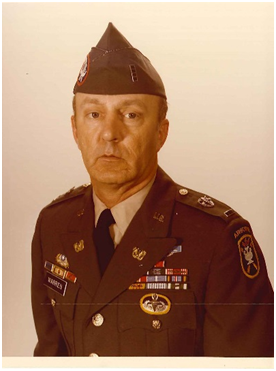 Chief Warrant Officer Four Roy Warren served with distinction for more than 32 years. This decorated Veteran served as an Infantryman, a Parachute Rigger, and as an Aerial Delivery Warrant Officer before retiring from active duty in December 1983. CW4 Warren enlisted in the Army in 1951, and served his initial combat tour in Korea as an Infantry Rifleman assigned to the 187th Airborne Regiment Combat Team. Following Korea, CW4 Warren was assigned to the 82nd Airborne Division where he was eventually transitioned to become a Parachute Rigger.

Following training, he was assigned to the 11th Parachute Maintenance Company, 82nd Airborne Division thus beginning his long and distinguished Quartermaster career. He excelled in all aspects of the rigger field including rigger heavy equipment for aerial delivery, packing both personnel and cargo parachutes. Recognizing his outstanding service training and leading Quartermaster Soldiers, CW4 Warren was appointed as an Aerial Delivery Warrant Officer in 1964.

While assigned to the United States Army 1st Special Forces Group Airborne, CW4 Warren trained with and supported partner forces in Thailand, Laos, Taiwan, Japan, and the Republic of Korea. He planned and executed all aerial delivery and parachute operations to support the Group’s varied and demanding mission schedule. During one of his three combat tours in Vietnam, CW4 Warren was assigned to the 5th Special Forces Group and was responsible for providing resupply and sustainment support to widely geographically dispersed Special Operating Detachments Alpha Teams operating throughout the Republic of Vietnam. He planned and executed routine parachute drops, external sling load and air-land resupply missions supporting the Special Forces Group while continuously engaging with enemy forces.