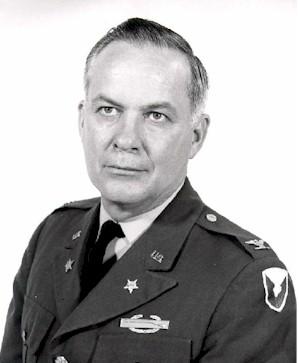 Colonel Hulsey entered the U.S. Army on 11 July 1941, five months before Pearl Harbor, attended Infantry Officer Candidate School and was commissioned Second Lieutenant upon graduation in November 1942. In the last two years of the war, he served as an Infantry officer in the 69th and the 29th Infantry Divisions, respectively – and was promoted to Major in March 1945.

Following World War II, Colonel Hulsey transferred to the Quartermaster Corps and served three years (1947-1950) with the Occupational Forces in Europe, as a Class I and Commissary Officer in Bremerhaven, Germany. During the 1950s Colonel Hulsey served as a Student Instructor and School Secretary at the Quartermaster Subsistence School in Chicago (1951-53); Storage Officer with the 55th Quartermaster Depot in Korea; and as Quartermaster Representative to the Overseas Supply Agency, San Francisco, California (1955-59).

An expert in supply management, in the 1960s Colonel Hulsey served at the Defense General Supply Agency in Richmond, Virginia; the U.S. Mobility Command, in St. Louis, Missouri; and as Chief of Supply at Headquarters, COMZ, in Orleans, France. Then was Deputy Commander of Qui Nahn Support Command and Commander of the Inventory Control Center, in South Vietnam (1968-69). Looking to the war’s end, he played a key role in the logistics draw-down and phased withdrawal of U.S. troops from Vietnam.

His last assignment before retiring on 31 July 1973, he served as Commander of the Combat Development Command Supply Agency and as Chief of Staff and Deputy Commander of the newly formed Logistics Center (today’s Combined Arms Support Command) at Fort Lee. Since his retirement the Quartermaster Corps has benefited immeasurably from his hard work and unrivaled service as a member of the Quartermaster Foundation.