Back to List
COL Charles D. Bartlett
Class of 2002 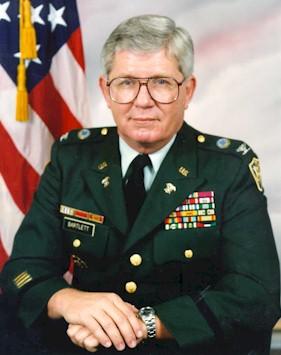 Colonel Bartlett was drafted into the Army in May 1966 and was commissioned through Quartermaster Officer Candidate School in May 1967. After successive tours as a platoon leader and company commander in Europe (1967-69), he studied Vietnamese at the Defense Language Institute in Monterey, California followed by a year-long tour as Team Chief for a Mobile Advisory Logistics Team in Vietnam. There, from 1969 to 1970, he directed logistics planning efforts for a host of Vietnamese supply and maintenance companies.

After completing his college degree requirements through the Ball State University “Bootstrap” program, and attending the QM Officer Advanced Course (1970-72), he served with the Defense Contract Administration Services Region, in Los Angeles, California where he first mastered the art of defense procurement. In 1976 he was assigned to Deputy Chief of Staff, Logistics, United States Army Europe/7th Army in Heidelberg, Germany, where he supervised more than 400 procurement personnel, stretching from the United Kingdom to Iraq; also accomplished all procurement planning and contingency contracting for annual REFORGER exercises.

Throughout the 1980s and 90s Colonel Bartlett either commanded or was a leading staff member in several of the Army’s and Department of Defense’s largest procurement and contracting agencies both here and in Europe. And nowhere was he more effective than in the Gulf War, where he served as Commander of the ARCENT Contracting Command, 22nd Support Command and Principal Assistant Responsible for Procurement for the entire contracting effort in Saudi Arabia, Kuwait, and the rest of Southwest Asia.

Colonel Bartlett retired in 1997 after an illustrious 31-year career to found his own company for consulting with Government and industry.