Back to List
COL Chris W. Stevens
Class of 2005 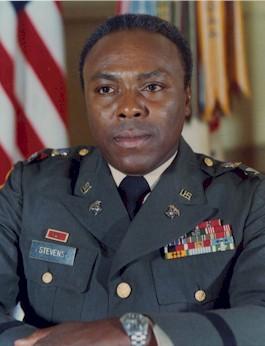 Colonel Stevens entered the army as a Private in 1945 and rose to the rank of Colonel before retiring in 1979.  Throughout his illustrious career, he commanded at every level to include the rank of colonel.  He served in combat with the 25th Division in Korea and in Vietnam on two different tours.  On his second tour, he served as the commander of 64th Petroleum Battalion.  During his tenure as a petroleum systems analyst with CINCPAC in Hawaii, Colonel Stevens was credited with designing an ADP system for managing petroleum products and ammunition inventory of over $781 million dollars.  Following service in Vietnam, he commanded the U.S. Army Support Center, Philadelphia, Pennsylvania and later served as the Commander of the 13th Corps Support Command at Fort Hood, Texas.

His final assignment before retirement was as the Commander, Defense Industrial Supply Center, Philadelphia Pennsylvania. In this capacity he provided oversight, leadership and management of the organization that had global support for America’s armed forces.  Colonel Steven’s logistics career continued after his retirement when he served as the Director of Logistics for the Richmond, Virginia public schools.