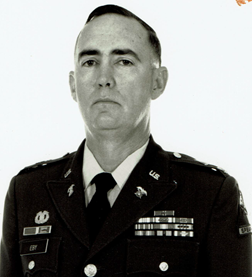 Colonel Daniel Eby culminated his distinguished service as the G-4 V Corps after commanding the 3d Armored Division’s Division Support Command (DISCOM) in combat.  As a Major, he served in the 3rd Armored Division in Germany. First as the S-4 of the DISCOM where he organized the property book accounts of the DISCOM units and led the effort to eliminate excess property, turn-in unneeded and un-serviceable salvage items, and bring the accuracy of property records up to 100%. He then moved on to become the Executive Officer of the 503rd Supply and Transport Battalion where he managed the internal operations of the Battalion. While in this critical role, the Battalion passed numerous Division, Corps, and NATO inspections. In addition to his duties as the XO, he commanded the Forward Area Support Team and supported Divisional deployments to the Grafenwoerhr Training Area all were described as flawless. After his spectacular success as the Executive Officer, he was chosen to become the DISCOM Support Operations Officer, where he developed and coordinated the DISCOM’s wartime plans, preparation and training thus producing a combat ready DISCOM. He became the first Commander of the 2nd Forward Support Battalion of the 24th Infantry Division and his Battalion provided supply, transportation, maintenance, and health services to support the 2nd Brigade, 24th Infantry Division. 2nd Forward Support Battalion was outstanding during the first deployment of the 2nd Brigade under the Forward Support Battalion concept to the National Training Center; it excelled at both logistics support and tactical operations. Two years after his departure from Fort Stewart, then Lieutenant Colonel Eby was promoted to Colonel and the Army selected him to return to Germany to command the 3rd Armored Division DISCOM. He trained and equipped the DISCOM for its deployment to Desert Shield/Storm and ensured the efficient movement of all Divisional equipment and units. He commanded the 3rd DISCOM throughout the entire deployment, supported the Division as it achieved its combat missions, coordinated the turn-in of ammunition and excess equipment, and then executed the redeployment of the 24th Division back to its home base in Germany.