Back to List
COL David L. Saunders
Class of 2015 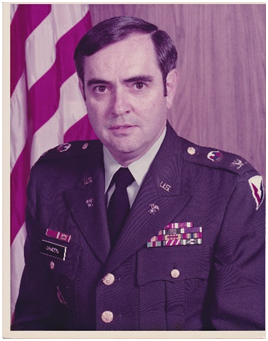 Colonel David Saunders was commissioned in the Regular Army following graduation from the ROTC Program at North Carolina State University in June 1959.  Throughout his outstanding career, Colonel Saunders commanded at the Company, Battalion, and Brigade level. During the Vietnam War, in which he volunteered twice, he served as the Forward Area Support Officer, 1st Cavalry Division, and was an adviser to the 2nd Army of the Republic of Vietnam Division. Colonel Saunders was cited for Heroism by disregarding his own safety after being seriously wounded during an intense enemy mortar attack, he spotted a wounded Soldier lying in an exposed area.  Colonel Saunders left his position and pulled the wounded Soldier to a safe location; for his actions, he was awarded the Bronze Star Medal with “V” Device.

While serving as the Commander, Special Projects Support Activity and Assistant Deputy Chief of Staff for Development, Engineering and Acquisition for Special Operations Forces, Colonel Saunders was responsible for establishing policy and program execution for $150 million special operations budget. He managed the development for a fleet of gun jeeps for the Ranger Regiment, three different types of Command Control Vehicles for Special Operations units and coordinated the safety of flight and airworthiness release for firing the Hellfire missile from the Hughes 500D Helicopter.