Back to List
COL Edward D. Arnold
Class of 2015 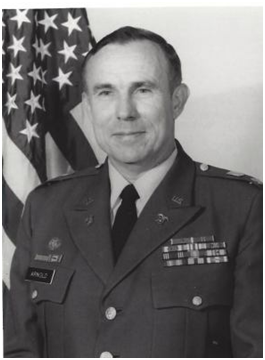 Colonel Arnold began his long and distinguished Quartermaster career following completion of Officer Candidate School in August 1962. In September 1965, he served as a Platoon Leader with the 625th Quartermaster Company in An Khe, Republic of Vietnam. Throughout his illustrious career, Colonel Arnold served at every command level from Platoon Leader to Commander, Division Support Command. In August 1989, he assumed duties as Assistant Commandant, United States Army Quartermaster Center and School after a series of three key command assignments and service as a Division G-4 in three of our Army’s well-known combat divisions. He had also served as Deputy Chief of Staff, Logistics for two Army Major Commands Theater Army in Europe and Forces Command. His breadth of experience in logistics units and headquarters in the US and overseas equipped him to evaluate mission doctrine and training for all Quartermaster Soldiers.  It also enabled him to guide the development of training teams to meet the needs of serving units. During his tenure he directed the field testing of combat rations to align with the latest concepts and doctrine for support in a Theater of Operations. He established the Food Service Training Department as an Army Center of Excellence and gave added emphasis to the importance of safety in both field and garrison operations.

Colonel Arnold was able to improve repair parts supply by drawing on his broad experience in planning system support at the wholesale level, leading improvements at division level and supervising maintenance operations at unit, direct support and general support levels. Focused on improving mobility, he stressed the use of the preplanned push concept, Army Stockage Level/Prescribed Load List standardization and the use of flex pallets and sling loads in doctrine and training. The Commanding General, US Army Logistics Center described his overall contributions with these words: “Colonel Arnold’s contributions as Assistant Commandant were marked by his inspirational leadership, technical expertise, and total dedication to excellence and steadfast support of training.” Throughout his tenure he demonstrated a unique ability to organize and direct operational support while concurrently developing programs to provide necessary training to Quartermaster Soldiers.