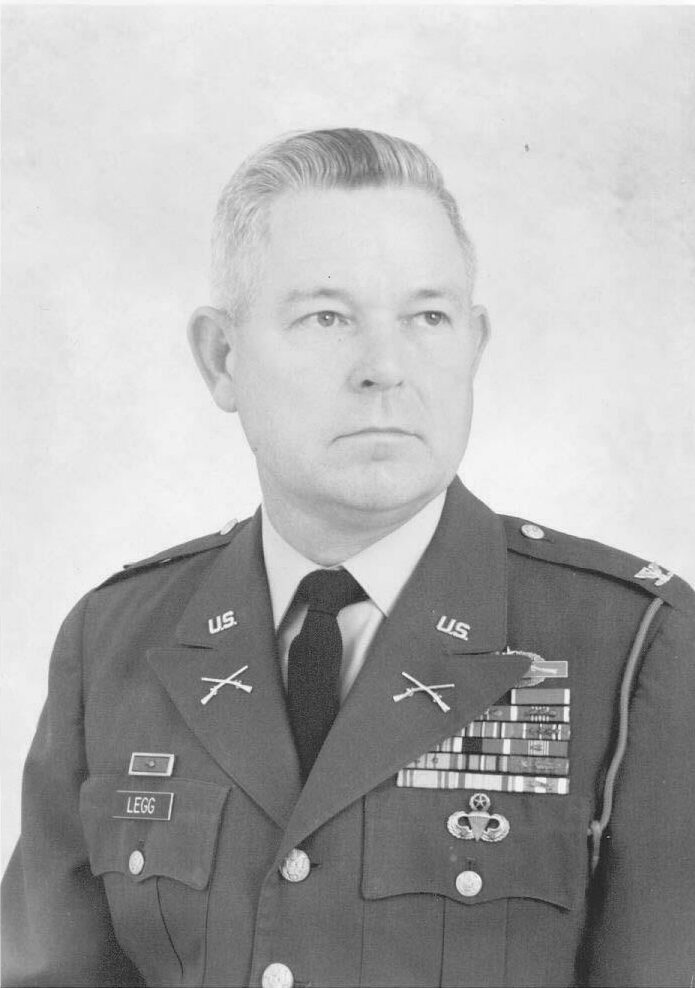 A native of Fola, West Virginia, Colonel Legg was born on March 17, 1923, and was the eldest of the 11 children of John Curtis Legg and Hattie Holcomb Legg. He entered West Virginia University in 1941 and planned a career in agricultural science before World War II intervened. He was inducted into the United States Army in 1943, and was assigned to the 603rd Quartermaster Graves Registration Company. In June 1944, he volunteered to make a glider landing with the 82nd Airborne Division on D-Day, and the next day began the 82nd cemetery at Blosville, Normandy. He transferred to the 82nd after the Normandy Campaign, became a qualified paratrooper, and was the Division graves registration specialist for the remainder of the war in Europe. He made a second combat glider landing in the Market Garden operation in Holland, and participated in the Battle of the Bulge and the final campaign in Germany.

After the war, Colonel Elbert completed his university degree, but had already decided on a military career. He received his commission as an Infantry Officer in 1948 and began a career that alternated between airborne infantry commands and military intelligence assignments. He retired as a Colonel in 1970 after distinguished service around the world, in both wartime and peacetime assignments. Highlights of his career include command of the 1st Battalion, 505th Parachute Infantry, 82nd Airborne Division, at Fort Bragg and in the Dominican Republic, 1964 to 1965; service as Inspector General of the 82nd Airborne Division, 1965 to 1966; US Army War College 1967 to 1968; service as G2, 1st Field Force, Vietnam, 1968 to 1969; and assignment to the Defense Intelligence Agency, where he served on National Security Council Committees for the White House, 1969 to 1970. He received 16 decorations for valor and achievement and was decorated by five foreign governments. In June 2004, Colonel Legg and his family participated in the commemorations for the 60th Anniversary of D-Day, in Normandy, and in May of this year, he was awarded the highest honor bestowed by the United States Army Quartermaster Corps, the Ancient Order of Saint Martin, for his actions in Normandy in 1944.