Back to List
COL Francis B. Holland
Class of 2004 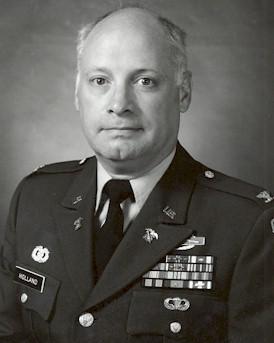 Colonel Holland is a Maryland native. He was commissioned a Second Lieutenant through ROTC upon graduating as a Distinguished Military Graduate from Loyola College, Baltimore, Maryland, and served as an Infantry officer until his transfer to the Quartermaster Corps in 1967. Thereafter he served 28 years on active duty, while enjoying a widespread reputation as one of the Army’s premier logisticians.

Colonel Holland had two tours in Vietnam, first as a Platoon Leader in the 4th Battalion, 503rd Infantry during 1966-67; then again from 1970 to 1971 as a G-4 staff officer in the 1st Cavalry Division, and later as Commander, A Company of the 15th Supply and Service Battalion. He subsequently commanded the 1st Corps Support Command’s Material Management Center, XVIII Airborne Corps, Fort Bragg; the 64th Support Battalion, 4th Infantry Brigade, Wiesbaden, Germany; and the 1st Forward Support Battalion, 8th Infantry Division, Mainz, Germany.

Colonel Holland is one of a handful of officers that can be considered an expert in the Acquisition/Contracting role, as well as Logistics War Fighter role. While commanding the Defense Contract Administration Region in Chicago (1988-92), he provided leadership and expertise to 35 offices and over 3,000 personnel. In the course of that assignment he successfully managed a $200 million settlement in the largest fraud case up to that point in Department of Defense history. It is still the landmark case and outcome in Defense Contract Administration.

“Whether it was supporting fighting forces in combat or managing multi-million-dollar contracts,” a past Quartermaster General observed, Colonel Holland’s people and organizations “always set the mark for others to strive for.”