Back to List
COL Frederick E. Johnson
Class of 1992 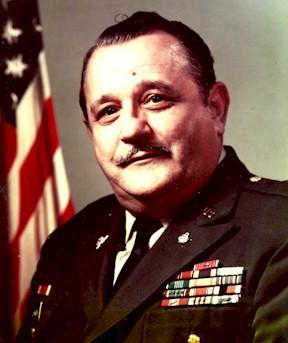 Colonel Johnson served more than thirty years as a Quartermaster officer.  After retirement for military service in 1972, he served eight years as a senior civil service employee.  Throughout his long and distinguished career he established a reputation as the top petroleum specialist in the United States Army.

His varied assignments took him through Southeast Asia, Taiwan, Korea, Japan, Canada, Alaska, Europe, and the North Africa coast.  In World War II, he commanded a Gasoline Supply Company, and was ultimately chief petroleum operations officer supporting the First, Third, and Ninth Armies, and the Eighth Tactical Air Force, and played a crucial role in the final defeat of Hitler’s forces in Europe.

In the 1950s Colonel Johnson directed construction of a massive petroleum pipeline and storage network on Taiwan, in support of the Nationalist Chinese.  He made an invaluable contribution to Western defense in the Cold War by overseeing development of the NATO petroleum pipeline–a system which even today is a shining example of combined logistics.  Later as Director of Petroleum, U.S. Army in Vietnam (1967-68), he was responsible for 2 1/2 million barrels of fuel distributed monthly in support of U.S. Forces in combat.

As head of the Quartermaster School Petroleum Department (1968-71) Colonel Johnson directed the training of thousands of petroleum specialists and helped lay a solid base for the Class III (POL) support that was demonstrated most recently during Operation Desert Storm.  In his last military assignment before retirement in 1972, Colonel Johnson, as Deputy Commander, Defense Fuel Supply Center, conducted worldwide procurement of petroleum products in support of all military and major civilian agencies in the U.S. Government.  In short, his whole life’s work has had a direct, positive impact on the Quartermaster Corps’ ability to “Fuel the Force”.