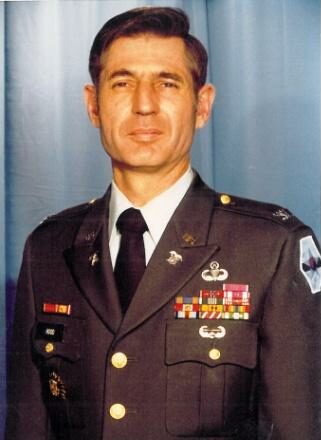 Colonel Harvey R. Hood entered the Army as a Private and rose to the rank of Staff Sergeant before attending Officer Candidate School at Fort Sill, Oklahoma in 1963.   He was assigned to the 1st Battalion, 320th Field Artillery in the 82nd Airborne Division where he served in a variety of career building assignments.   After an assignment in Field Artillery, Colonel Hood was assigned to Europe where he served in the 557th Quartermaster Company as an Operations Officer, Platoon Leader and Executive Officer in a unit that had both a conventional and unconventional support mission for U.S. and allied forces in Europe.  Upon completion of this assignment, he became the Commander of Company A, 9th Supply and Transport Battalion, 9th Infantry Division in the Republic of Vietnam in September 1967. Because of his successful command, he was reassigned to the G-4, 9th Div where he executed staff oversight of the supply operations and support for the 22,000 Soldiers assigned to the Division. He was assigned to the Aerial Delivery Department at the Quartermaster School prior to attending the Quartermaster Advanced Course.  In such a short time, he made a lasting impression on this department for his studies and analysis of accident and fatality rates, equipment malfunctions and methods to improve load bearing equipment.  After the Advanced Course, Colonel Hood returned to Vietnam and was assigned as Plans Officer, Assistant Chief of Staff, G-4, 23rd Infantry Division. Because of his stellar performance, he was reassigned as the S-4, 196th Infantry Brigade in Vietnam.   After a brief tour in the 82nd Division, he was then reassigned to the 101st Airborne Division (Air Assault).  After serving as the Executive Officer of the 426th Supply and Service Battalion , the Division Material Management Officer and Special Assistant to the 101st Division G-4, he became commander, of the 561st Supply and Service Battalion, Headquarters Command, Fort Campbell, Kentucky where he  made terrific strides as the 101st Division’s primary back up support for petroleum line haul, rapid refuel/defuel of the 101st Division’s 458 aircraft, operated a Central Issue Facility carrying $6M in inventory and provided Direct Support/General Support maintenance for over 730 vehicles and Engineer items.

Upon completion of the Industrial College of the Armed Forces, Colonel Hood was assigned to the Assistant Chief of Staff, Office of the Deputy Chief of Staff, Logistics, Department of the Army as a Logistics Staff Officer for Plans, Force Structure and Systems.   Colonel Hood then was selected to be the C-4 of Combined Field Army   Korea.  He served as the principal advisor to the Commanding General in all matters pertaining to logistics including force structure, readiness support for all tactical plans involving United States / Republic of Korea forces assigned or attached to CFA.   He was then assigned as the Commander of the Defense Distribution Center, Mechanicsburg, Pa where he distinguished himself by reducing out of stock items to 7% and reducing customer complaints to 1% while increasing discrete line items stocked from 56,000 to 163,000. Following his command tour, he became the Deputy G-4, Forces Command in Atlanta, Georgia.  In this capacity, he oversaw the logistics readiness for 12 divisions, 5 brigades, 20 installations and over 547,000 Active and Reserve soldiers.  Again, he excelled by reducing vehicle operating costs by 30% by initiating a lease program, consolidated contracting offices, saving over $13 Million dollars in two years, coordinated the improvements in a regional travel service contract resulting in improved service at reduced costs and was instrumental  in reducing rail costs by over $3 Million dollars.  Colonel Hood culminated his active military Service as the Commander of the Army’s Logistics Evaluation Agency where he provided leadership and oversight of major logistics studies and analysis, developed, wrote and published regulatory guidance for supply, maintenance and selected transportation functions while directing the fielding of seven new Army automated systems.

Colonel Hood holds a Bachelor’s of Science Degree in Petroleum Engineering from the University of Kansas and a Master of Science Degree in Public Administration from George Washington University.  His military schooling includes the Field Artillery Officer Basic Course, the Quartermaster Officers Advance Course, Command and General Staff College and the Industrial College of the Armed Forces.