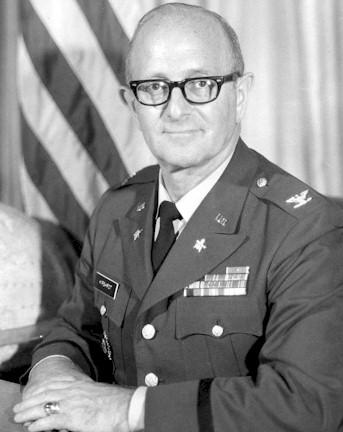 Colonel Kirshrot began his military career as an Enlisted Soldier at Camp Lee, Virginia, in March 1942. He attended basic training at Fort Knox, Kentucky, and after graduating from Quartermaster Officer Candidate School was commissioned second lieutenant in 1943.

During World War II, Colonel Kirshrot served first with the 78th Infantry Division in North Africa, then with General Mark Clark’s Fifth Army in Italy. As a platoon leader with the 90th Quartermaster Railhead Company, his unit landed at Salerno on D-Day, and came ashore amidst intense and sustained enemy bombardment. They continued accompanying ground forces in combat throughout the Po Valley Campaign, and set up forward ration supply points the whole way. Shortly after being promoted to First Lieutenant, Colonel Kirshrot took command of the 90th Quartermaster Railhead Company in Italy.

Over the next three decades Colonel Kirshrot held key command and staff positions with the Sixth Army in Europe, the Eighth Army in Japan, at the Pentagon, and with key Quartermaster agencies at home and abroad. During the Vietnam War, Colonel Kirshrot commanded the Long Binh Depot from May 1971 until May 1972. And the following year ran Headquarters, United States Army Europe’s Logistics Operation Center during its support for the 1973 Middle East War.

Colonel Kirshrot retired at Fort Lee in July 1974, after a long and very productive career. He enjoyed an equally active career in academia afterwards, and has served as a Special Advisor on Arms Control, with ambassadorial status, for Presidents Reagan and Bush. He also continues to support the Quartermaster Corps as a member of the Quartermaster Foundation.