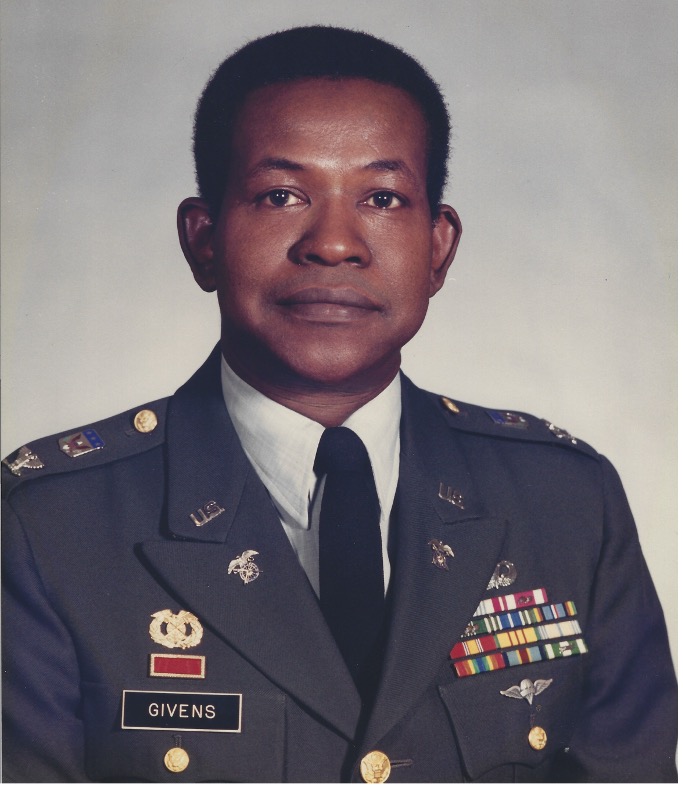 Colonel Givens served with distinction for nearly 30 years as a prodigious leader and gifted logistician in jobs of ever increasing responsibilities in the United States and Overseas. He was commissioned as a Second Lieutenant in the Quartermaster Corps, in1966, upon graduating from Prairie View A&M College, Texas, ROTC Program, with a Bachelor of Science Degree in Agricultural Education. He completed the Quartermaster Officer Basic Course at Fort Lee, Virginia and remained there as a Support Platoon Leader for the Quartermaster Officer Candidate School.  In 1967-68, he served with distinction in the Republic of Vietnam as the Executive Officer for Headquarters and Headquarters Company, 45th General Support Group, followed by duties as a Platoon Leader and Executive Officer of a Line company in the 88th Supply & Service Battalion.

After serving as the Director of Supply at Fort Dix, New Jersey in 1968-69, Captain Givens completed Rigger School and later reported to the Nahbollenbach Army Depot in Germany where he served from 1969-1972. He commanded the 85th Supply and Service Company and later served as the Director of Administration for the Depot. He returned to Fort Lee in 1972 and attended the Quartermaster Officers’ Advanced Course before becoming the Eighth Army Food Advisor in Korea, a position normally held by a Lieutenant Colonel, which he held as a Captain in 1972-73.  Returning to Fort Lee in 1974, he was assigned to the Directorate of Training and earned a Distinguished Instructor Award. Duty in Germany was in his future again, and in 1977, he reported to the 200th Theater Army Materiel Management Center and became the Chief of Theater War Reserve Materiel and Prepositioned of Materiel Configured in Unit Sets Stocks until 1980.

Subsequent to his tremendous success in this position, in 1980, he became Commander, Defense Subsistence Office-Seattle. Major Givens reported to the Armed Forces Staff College and upon graduation was assigned as a Staff Officer in the Transportation and Troop Support Directorate, Office of the Deputy Chief of Staff for Logistics, DA. Following this illustrious assignment, he received his Master’s Degree from the Florida Institute of Technology and then assumed command of the 2nd Battalion, Quartermaster School Brigade in 1985; and in 1988, he attended the Army War College in Carlisle, Pennsylvania.

Colonel Givens culminated his distinguished military career in successive assignments in the Defense Personnel Support Center; the Defense Subsistence Region Europe and ultimately as the Deputy Chief of Staff, Logistics of the Military District of Washington.