Back to List
COL Jeffrey R. Earley
Class of 2009 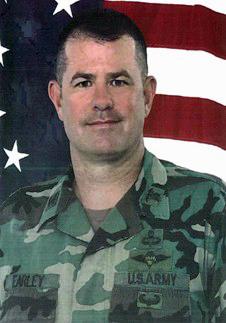 Colonel Earley is a native of Cincinnati, Ohio.  He is a 1972 graduate of Valley Forge Military Academy and was commissioned in 1976 as a Distinguished Military Graduate of Monmouth College, Monmouth, Illinois.  His military education includes the Quartermaster Officer Basic and Advanced Course, the US Marine Corps Command and Staff College, and the US Army War College.  He holds a master’s degree in Management from Webster University.

His initial assignment was Supply Officer, Battalion Property Book Officer and Supply Platoon Leader with the 75th Support Battalion, 194th Armored Brigade (Sep), Fort Knox, Kentucky.  He was transferred to Fort Lee, Virginia, where he served as aide-de-camp to Commander, Troop Support Agency and attended the Quartermaster Advanced Course.  His next assignment was to Korea, where he served as Alpha Company Commander, 2nd Supply & Transportation Battalion, 2nd Infantry Division.  Upon his return from Korea, he attended Rigger School enroute to Fort Bragg, North Carolina, where he served as Operations Officer and later as Commander of the 612th Quartermaster Company (Aerial Delivery), 1st Corps Support Command.  He continued his career at Fort Bragg where he assumed command of 364th Supply and Service Company (Direct Support).  He deployed this unit to Operation Urgent Fury, Grenada, in October 1983.  After completing his tour at Fort Bragg he was assigned to the Military Personnel Center in Alexandria, Virginia, where he served as Board Recorder, Department of the Army, Secretariat for Selection Boards and as Professional Development Officer, Quartermaster Branch.  His next assignment was Fulda, Germany, where he served as Executive Officer, Support Squadron, Director of Logistics, and Regimental S-4, 11th Armored Cavalry Regiment.  Following his return from Kuwait and Germany, he was assigned as Deputy G-3, 1st Corps Support Command, Fort Bragg, North Carolina.  Colonel Earley assumed command of 27th Main Support Battalion, 1st Cavalry Division, Fort Hood, Texas.  In July 1995, he became Quartermaster Branch Chief, Department of the Army, Personnel Command, Alexandria, Virginia.  Following that assignment, he attended the US Army War College, Carlisle, Pennsylvania.