Back to List
COL John F. Dennington
Class of 1995 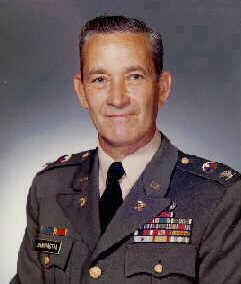 Colonel Dennington graduated from Texas A&M University with a Bachelor of Science degree in January 1943. He was commissioned a Second Lieutenant in the Quartermaster Corps. Ordered to Europe in January 1944 from the Atlanta General Depot, he served in the Supply Division, Office of the Theater Quartermaster, before volunteering for duty as Quartermaster Supply Officer, 101st Airborne Division. He participated in four campaigns and was cited for his contributions in Holland and Bastogne. He returned home in early 1946 and was released from active duty in the Grade of Captain.

Recalled to active duty in August 1948, Colonel Dennington served his country in many duty positions over the next 30 years to include: Commander, 561st Quartermaster Petroleum Supply Company; Quartermaster Supply Advisor to First Republic of Korea Army; Commander, 501st Supply and Transport Battalion; Commander, 45th General Support Group (Vietnam); Commander, Defense Industrial Plant Equipment Center; Commander, Lexington-Blue Grass Army Depot, and as Deputy Chief of Staff, Logistics, Fifth US Army. Colonel Dennington’s contributions to the Quartermaster Corps are varied and significant. In Europe, he developed the logistics portions of war plans. He played a key role in developing early plans for the removal of materials from Vietnam. He was Deputy Chief of Staff, Logistics’s initial representative involved in developing the Selected Item Management Systems, which was vital for accurate asset visibility. As Quartermaster Branch Chief, Colonel Dennington improved selection rates for promotions, commands and schools for Quartermaster Officers. As Commander, Lexington-Blue Grass Army Depot, Colonel Dennington used his personal influence to ensure that personnel affected by a major staff reduction from 4,600-1,800 civilian employees would be employed elsewhere.