Back to List
COL Joseph L. Juskowiak
Class of 2009 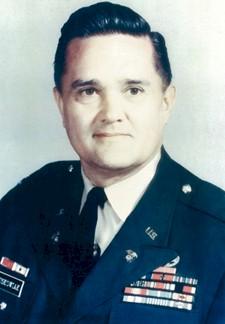 Colonel Juskowiak was born in Shamokin, Pennsylvania, on December 12, 1921.  Entering the Army in 1942, he graduated from Officer Candidate School, Camp Barkley, Texas, the following year.

As a Second Lieutenant in the Medical Service Corps, he was assigned to the 369th Medical Battalion, 69th Infantry Division, Camp Shelby, Mississippi, where he served as an Ambulance Platoon Leader and Company Commander.

During World War II he participated in the Rhineland and Central European Campaigns as a member of the 69th and 29th Infantry Divisions, European Theater of Operations. This was the division that met the Russians on River Elbe.

Released from active duty following World War II, Colonel Juskowiak was recalled at the outset of the Korean War and assigned as Assistant Property Officer, QM Section, 6012th AUS, Camp Stoneman, California, and then to Korea.  At this time he branch transferred from the Medical Service Corps to the Quartermaster Corps. In Korea from 1951 to 1953, he participated in four campaigns while serving with the Headquarters, Eighth US Army Far East Command.

After a 3-year tour of duty at Aberdeen Proving Ground, Maryland, he attended the University of Maryland, became a student in the Associate Quartermaster Officer Advanced Class at the Quartermaster School, Fort Lee, Virginia. After graduating in 1956, his next assignment was the 35th QM Battalion, 2d Quartermaster Group, United States Army Europe, in Ludwigsburg, Germany for another 3-year period.

From December 1959 to August 1963 he was assigned to the Office of the Quartermaster General.  This service was interrupted by his attendance at the Command and General Staff College, Fort Leavenworth, Kansas, and the Army Supply Management Course at Fort Lee, Virginia.  On August 29, 1963, he was assigned as Logistical Staff Advisor, Military Assistance Advisory Group, Republic of China (Taiwan).

After 2 years in Taiwan, Colonel Juskowiak served as an Executive Officer and Group Commander with the 54th General Support Group, Fort Benning, Georgia, subsequently taking the Group to Vietnam. Next came two assignments as Commanding Officer of the Phan Rang Sub Area Command and the Cam Ranh Bay Sub Area Command.  While in Vietnam (from December 1966 to November 1967) he participated in both Phase II and Phase III Counteroffensives.

Upon his return from Vietnam in November 1967, he was assigned as Chief, Services Section, US Army Infantry Center, Fort Benning, Georgia.  .

From October 1970 through May 1972 he was assigned as the Deputy Chief of Staff for Logistics at Headquarters, US Army Intelligence Command, Fort Holabird, Maryland.  He then was reassigned to Hawaii where he served as Chief of the Support Services Division, DCSLOG, US Army Pacific, Fort Shafter, Hawaii.  On June 7, 1973 he assumed the position of Deputy Installation Commander, Fort Lee, Virginia.