Back to List
COL Leonard L. Jackson
Class of 2000 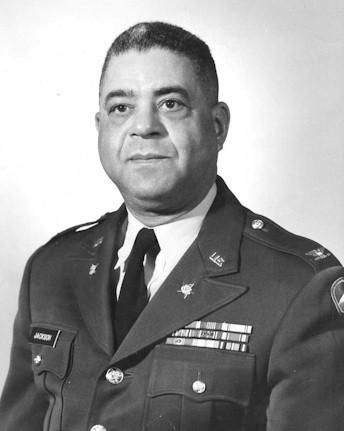 Colonel Jackson entered the U.S. Army during World War II, and was commissioned Second Lieutenant in the Artillery upon graduating from Officer Candidate School at Fort Sill, Oklahoma, in July 1942. He was assigned to Italy as a Commander in Battery B, 597th Field Artillery Battalion, and participated in the Rome, Arno, Po Valley, and North Apennines campaigns in the last year of the war.

After the war Colonel Jackson transferred to the Organized Reserves, but returned to active duty as a Quartermaster officer in 1949. Over the next quarter century he held a variety of troop training and logistic support assignments overseas (United States Army Europe and United States Army Pacific) and at military installations in the continental United States.

Among the highlights of his career were his assignments as V Corps Quartermaster in Frankfurt, Germany, and Commander, 627th Supply and Service Battalion with duty in the Dominican Republic. This was a composite battalion with the mission to provide all supply, service (except transportation) and maintenance support to the 8,000-member multi-national Organization of American States Peace Force. Utilizing his broad base of logistical training and experience, coupled with his forceful and diplomatic leadership, Colonel Jackson inspired his battalion to provide outstanding logistical support to the Inter-American Peace Force.