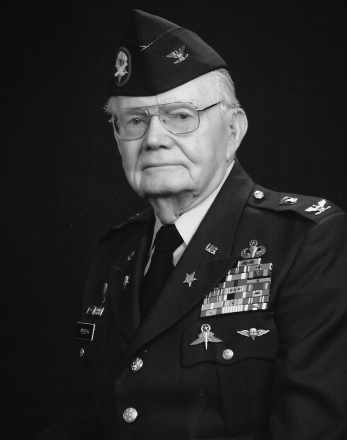 Colonel Louis “Pete” Peterka was born and raised in Fort Worth, Texas in 1926. He enlisted in the United States Marine Corps in 1942 at the age of 16.  Peterka served in the Pacific Theater of Operations during World War II and was highly decorated for the many combat operations in which he served as a rifleman in Marine infantry units.  He participated in operations on Midway Island, Kwajalein Island, Saipan, Tinian and Guam. Following WWII he left the Marine Corps as a Staff Sergeant.  In 1951, he entered the US Army and was commission as a Quartermaster Officer through Officer Candidate School.  His education includes a Bachelor’s of Arts Degree in Business Administration from University of Maryland and the Command and General Staff College.

COL Peterka’s major assignments include numerous positions as an Aerial Delivery Officer in the 82nd Airborne Division and in Europe.  He served as a Test Officer at the Quartermaster Research and Development Center at Fort Lee, Virginia in 1956. During this time he helped develop and tested a new military parachuting technique called High Altitude Low Opening (HALO).  He was recognized as one of the first Soldiers to make a HALO jump.  Later, he served as an air drop test officer at Yuma Proving Grounds, Arizona.  Peterka served as the Deputy Chief of Staff, G-4 for the 101st Airborne Division and oversaw the deployment of that division to the Republic of Vietnam in 1965.  Once the division was deployed and operating, Colonel Peterka assumed command of the 426th Supply and Services Battalion, 101st Airborne Division Support the “Screamin’ Eagles” in combat.  He served as the Director of the Aerial Delivery Department, US Army Quartermaster Center and School from 1972 until his retirement from active duty in 1974.