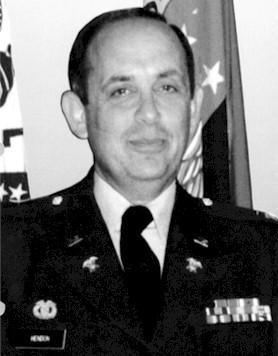 Colonel Hendon entered the U.S. Army as an Enlisted Soldier in 1969 and was commissioned Second Lieutenant through Officer Candidate School in 1970. Over the course of his outstanding 26-year career as a Quartermaster officer he served with and commanded some of the Army’s best logistics units in Europe and Vietnam, as well as here at home.

As a Supply Support Officer in Danang, Republic of Vietnam, from 1972 to 1973, he helped develop and implement logistical operations throughout I Corps at a critical time in the war. Upon his return from Vietnam he was assigned as a Company Commander with the 1st Corps Support Command (COSCOM) at Fort Bragg, and took part in several ground-breaking field exercises while establishing logistical support over a widely dispersed geographical area.

While serving with the 25th Infantry Division at Schofield Barracks, Hawaii (1976-79), Colonel Hendon distinguished himself by developing new logistical support plans and forward-looking training courses for rapid deployment to Korea, New Zealand, and Australia. In 1979 he was assigned to the 3rd COSCOM at Fort Hood, Texas, where he again created innovative policies to ensure accountability of supplies and equipment on a massive scale. As Commander of the 8th Maintenance Battalion, 3rd COSCOM, U.S. Army V Corps in Europe (1987-89), Colonel Hendon planned and executed multifunctional logistics support for major military operations, to include REFORGER 88, the largest corps on corps exercise since World War II.

Colonel Hendon concluded his illustrious career with key staff assignments at the Defense Logistics Agency (1991-95) where he continually broke new ground in logistics engineering, automation, contracting, and related policy issues. He was inducted as a Distinguished Member of the Quartermaster Regiment in 2002.