Back to List
COL Oscar J. Sanders
Class of 1994 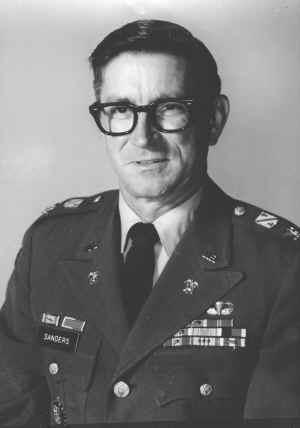 Colonel Sanders enlisted in the United States Army in June 1945 and served in Europe until December 1946. He was commissioned on May 27, 1950, as a Second Lieutenant in the Quartermaster Corps after completing Reserve Officer ‘Training at the University of Alabama. He later received his master’s degree from the University of Alabama. He also attended the Industrial College of the Armed Forces.

Colonel Sanders’ significant contributions to the Quartermaster Corps are many. He participated in the equipment fielding, modification, and the field testing of the bulk refueling concept of armored combat units in field operations. Colonel Sanders’ developed the methodology for determining daily requirements for aerial resupply by helicopter lifts with division air elements. Also, he was the Army’s team leader of the task force responsible for developing the concept of the Direct Supply System.

Colonel Sanders’ awards and decorations include the Legion of Merit (with three Oak Leaf Clusters), the Bronze Star Medal, and the Army Commendation Medal (with two Oak Leaf Clusters). He also earned the Parachutist Badge.