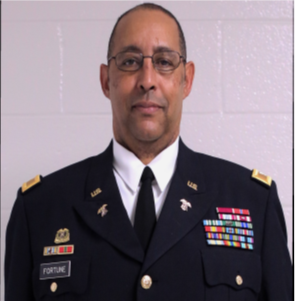 Colonel Fortuné received his commission as a Quartermaster Officer in the ROTC program at Xavier University. He served in numerous leadership and staff positions, among them as the aide-de-camp to the CG, 200th Theater Army Materiel Management Center.  He commanded Delta Company (Heavy Maintenance), 702nd Main Support Battalion, 2nd ID in Korea, served in 24th Infantry Division Support Command, Fort Stewart, and as the Division Readiness Officer, Brigade S-4, and Executive Officer for the 224th Forward Support Battalion. He deployed as Logistics Officer in support of a Mechanized Task Force for OPERATION UPHOLD/RESTORE DEMOCRACY.