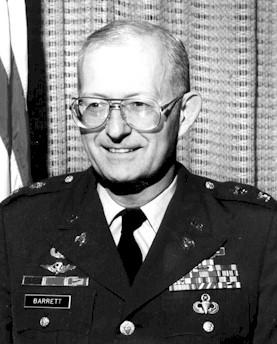 Colonel Barrett, a native of Royal Oak, Michigan, was graduated from Western Michigan University in 1957 where he was also commissioned through the ROTC program.

During the Vietnam War, he served as Captain/S-4 in the 5th and 6th Special Forces Groups, first providing logistics support for long range reconnaissance missions, and later supervising and directing supply operations in support of 3,500 U.S. Special Forces and 50,000 indigenous personnel in over 100 camps located throughout Vietnam. As a Major promotable, Colonel Barrett later served as the G-4 for a multi-national NATO force that included seven nations, 4,000 men, and over 1,000 vehicles.

After commanding the 553rd Supply and Service Battalion at Fort Hood, Texas, Colonel Barrett returned to Vietnam to take part in the U.S. drawdown. This time he was advisor to the Chief Quartermaster of the Republic of Vietnam Armed Forces on all supply matters relating to QM Class I, II, III and IV. Also, during the Easter Offensive of 1972, he was put in charge of the aerial delivery operations that supported An Loc. Among other senior level assignments Colonel Barrett commanded the Defense Depot in Mechanicsburg, Pennsylvania; was Deputy Commander of the 1st Corps Support Command at Fort Bragg; and Assistant Chief of Staff C-4, Logistics, Combined Field Army (ROK/US) in Korea. Moreover, as Commandant of the U.S. Army Logistics Management College, Colonel Barrett oversaw the accreditation process that resulted in ALMC moving from being a “Center” to a full-fledged “College.”