Back to List
COL Rohland A. Isker
Class of 2004 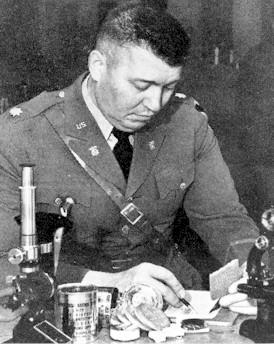 Colonel Isker was born in Minneapolis, Minnesota. He joined the Minnesota National Guard in December 1915 while still an undergraduate chemistry major at the University of Minnesota. He saw active service on the Mexican border in 1916, and the following year graduated from the first Officer Training Camp at Fort Snelling, Minnesota. A valuable trainer, he spent the course of World War I as a stateside instructor in Texas.

Colonel Isker remained on active duty during the interwar years, and saw varied service as a Cavalry officer with tours in the Philippines, China, Siberia, and Japan, and in the western United States. In 1934, he attended the Quartermaster Subsistence School in Chicago, which engendered in him a lifelong interest in the lore of cookery, and the science and technology of food.

In 1939, Colonel Isker transferred to the Quartermaster Corps and soon became Commander of the newly established Quartermaster Subsistence Laboratory in Chicago, Illinois. There, as World War II unfolded, he had the unprecedented challenge of establishing a wide range of rations (B-, C-, D-, K-, 5-in-1, 10-in-1, Assault Packs, etc.) for use in all theaters of operation, in every climate and condition, that Allied troops came to face in a truly Global Conflict.

To accomplish this monumental task Colonel Isker drew in scientists and engineers from across the nation – including food chemists, bacteriologists, home economists, food acceptance specialists, and packaging engineers – and together they created the first logical, comprehensive and effective ration sys-tem for military operational feeding in our military history.

Colonel Isker was one of the true pioneers in Army Food Service research and development, and a great supporter of the Quartermaster Corps.