Back to List
COL Samuel Benjamin Spicely
Class of 2014 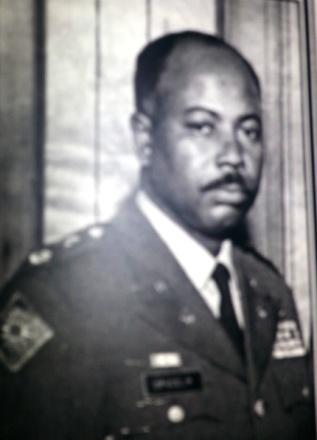 Colonel Samuel B. Spicely was born in Dinwiddie County, Virginia on 3 January 1929.  He received his education at an early age in the schools of Dinwiddie County, graduating from Dinwiddie Training School in 1945.   Following his primary and secondary education, he attended Virginia State College, (now Virginia State University) for one year before enlisting in the Army.   Colonel Spicely served with the 24th Infantry Regiment of the 25th Infantry Division in the Pacific and Japan.  Upon his discharge, he returned to Virginia State to continue his college education and enroll in the ROTC Program graduating in 1951 with a Bachelor of Science Degree in Physics and a Regular Army Commission as a 2nd Lieutenant in the US Army Quartermaster Corps.

In 1953, Colonel Spicely was assigned to the Quartermaster Center and School where he attended a number of schools and served as the Executive Officer and Commander of Company C (Airborne) Quartermaster School Regiment from 1956 thru 1959. Colonel Spicely served with distinction in Wildflecken, Germany.  Returning to Fort Lee in 1959, Colonel Spicely attended Associate Quartermaster Officers Advanced Course.  Additionally, he served in a variety of career building assignments in the Airborne Department and ultimately he became the Chief of the Air Delivery Branch.  In 1964, he was assigned  to Fort Leavenworth for attendance at the Command and General  Staff College.  Colonel Spicely then served with the Army Concepts Team in Vietnam, then on the Strategy and Tactics Analysis Group in Washington, DC.  Later he served as the Commander of the Logistics Data Center in Lexington, Kentucky.  Upon his return to Fort Lee in 1977, Colonel Spicely retired from the Army after 31 years of service.

His awards and decorations include the Legion of Merit with one oak leaf cluster, the Bronze Star Medal, the Meritorious Service Medal and the Senior Parachutist Badge.