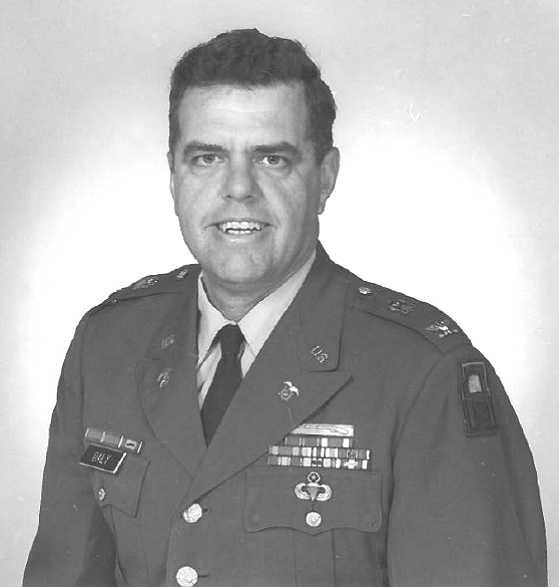 Colonel Daly graduated in 1959 from Fordham College, New York, as a Distinguished Military Graduate and received a Regular Army commission into the Infantry. His first assignments were with the 101st and 82nd Airborne Divisions as a weapons platoon leader. Later he was assigned as an advanced airborne instructor, leading him to transfer to the Quartermaster Corps. Then, as a Captain, he served as an aerial supply officer in the Pacific, and later as the operations officer at the Rigger School. Captain Daly served in Vietnam as the Supply and Transport Company Commander, 4th Infantry Division. Following language school, he deployed as an advisor to the Saudi Arabian Army. Graduating with a Master’s degree from George Washington University, he returned to the 82nd Airborne Division serving as the division supply officer. While there he was involved in the formation of the Division Materiel Management Center, and then commanded the 407th Supply and Support Battalion. He then served as an advisor to the 42nd Infantry Division (New York Army National Guard). After graduation from the Industrial College of the Armed Forces, he returned to Fort Bragg as the Chief of Staff, 1st Corps Command. His last assignment in the 82nd Airborne Division was as the Division Support Command Commander. Colonel Daly deployed the Brigade to Grenada and was responsible for security at Point Salinas airfield. As part of this mission he coordinated the safe evacuation of the U.S. students, and the eviction of the Soviet embassy. His final Army assignment, he served as the Supply Chief, and Chief of Plans and Operations, Department of the Army, G-4.

Upon retirement in 1987, he joined The Analytic Service Corporation as the readiness officer supporting the National Reconnaissance Office. He was the U.S. representative for the approval of all equipment emplaced in National Reconnaissance Office ground stations.  He is a recent inductee into the Fordham University Army Reserve Officer Training Command Hall of Fame.