Back to List
COL John D. Broderick
Class of 2015 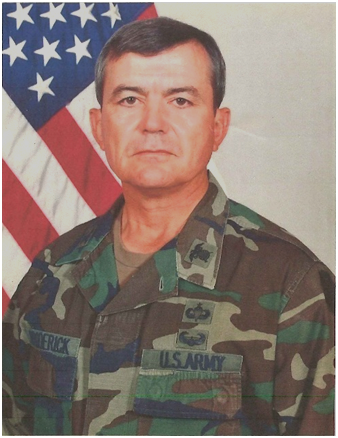 Colonel John D. Broderick was commissioned in the Regular Army following graduation from North Georgia College in May 1970.  By request of two different Corps Commanders, Colonel Broderick twice served as the XVIII Airborne Corps G-4. As the Corps G-4, Colonel Broderick planned, coordinated, and directed the multi-functional logistics support of the Nation’s contingency force of 85,000 Soldiers located at six installations and consisting of four Divisions, 12 separate brigades, a Corps Support Command, and an Armored Cavalry Regiment. Colonel Broderick led a multi-disciplinary staff of 17 officers while developing and implementing programs to routinely identify, report, and redistribute major items of excess equipment within the XVIII Airborne Corps.

During the first year of the program, equipment valued at more than $20 million was redistributed to fill critical shortages across the XVIII Airborne Corps. He also formulated and implemented a set of comprehensive operational logistics performance metrics by linking standard automated reports to produce a plain language report. This innovative product preceded reports now found in the Logistics Support Agency’s Logistics Information Warehouse. This initiative provided senior leaders with an accurate and timely picture of the overall organizational readiness as well as subordinate units and their weapons systems.

Colonel Broderick commanded the 426th Supply and Transport Battalion, 101st Airborne Division supporting the initial attack during Operation Desert Storm. He developed an innovative system to rapidly refuel multi-engine helicopters at remote desert locations to support the largest combat air assault operation in history. He led an organization that flew 93 miles into Iraq on the initial attack of the ground war and established the systems to refuel and rearm more than 200 helicopters within four hours. He was the second Battalion Commander to land in Iraq, less than a minute after the Infantry Commander who was responsible for providing security for Colonel Broderick’s operation. In the book, Lighting in the Storm, Major General Peay, 101st Commanding General stated “From my experience in two wars, I know of no similar unit with such vital responsibilities to be carried out in this unique and dangerous situation. If a combat Battalion failed, another would step in, but if S&T failed at Cobra, there was no one else to do the job. It was that simple, and responsibility for that job was John Broderick’s.”