Back to List
CPT Helen Horlacher Evans
Class of 2017 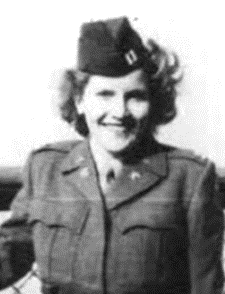 Helen Horlacher Evans was a home economics teacher at Versailles High School in Lexington, Kentucky, at the beginning of World War II. In May 1942, she and other high school teachers dared each other to apply for the Women’s Army Auxiliary Corps (WAAC) and later the Women’s Army Corps (WAC). Though only 21 years old at the time, she was accepted for the second Officer Candidate School and trained at Fort Des Moines, Iowa. Mrs. Evans’ duty assignments during her four years of service were unique among WAC Officers and of significant benefit to the Quartermaster Corps. After training in Army food service at Fort Riley, Kansas, and at the Inspector General School, she became the Office of the Quartermaster General Inspector for state-side Women’s Army Corps “Mess Halls.” She provided food service training at the Women’s Army Corps Training Centers. In May 1944, the Chief of the Food Service Section of the Office of the Quartermaster General held a conference to determine the food and other requirements of the Women’s Army Corps population. At this same conference, as reported by the Cincinnati Enquirer (May 4, 1944), First Lieutenant Helen Horlacher briefed the latest developments in Women’s Army Corps mess hall management to the conference. In early 1945, Mrs. Evans was reassigned to the Office of the Quartermaster General in the European Theater of Operations. In this assignment, the now Captain Horlacher inspected Army Mess Halls in Europe and assisted in the feeding of prisoners of war in Germany. Since leaving the Army in 1946, she has been very active in her community and in state affairs throughout Kentucky. Mrs. Helen Horlacher Evans actively supported veterans through recording oral histories for the Library of Congress, assisting Honor Flights, and as a Daughters of the American Revolution representative at the Lexington Kentucky Veterans Affairs Medical Center. The U.S. Army Women’s Museum is privileged to have recorded Mrs. Evans’ own oral history.