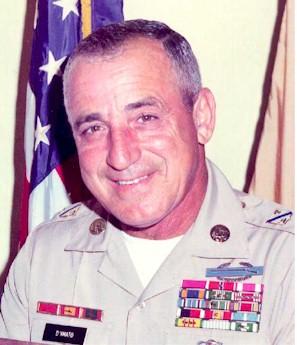 CSM D’Amato enlisted in the U.S. Army in April 1943. Following eight weeks of Infantry basic training at Camp Robinson, Arkansas, he volunteered for airborne school, and upon earning his wings was assigned to the 507th Parachute Infantry Regiment in France. His team made the last combat jump of World War II into Wessel, Germany. It would be twenty-five years before CSM D’Amata saw combat duty again – this time in Vietnam.

Following his retirement from the Army in 1976, Command Sergeant Major D’Amato spent 15 years in Civil Service with the Defense Commissary Agency. After retiring from civil service, he continued to serve the Army by volunteering in the pharmacy at Kenner Army Health Clinic.

A highly decorated veteran of two wars, Command Sergeant Major D’Amato was regarded by peers and superiors alike as a “Model NCO.” His entire career (both before and since retirement) speaks to overwhelming competence, selfless service and a lifetime of devotion to duty.