Back to List
CSM Cynthia Ann Pritchett
Class of 2014 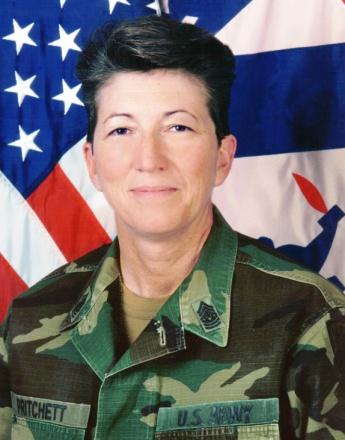 CSM Pritchett entered the Army in 1973 during the waning years of the Women’s Army Corps.  Shortly thereafter, she was integrated into the Quartermaster Corps.  For 37 years she was known as a trailblazer, a standard bearer, a magnificent and selfless soldier, a premier leader and logistician, and a warrior and diplomat.  Progressing rapidly through enlisted ranks, she graduated from the United States Army Sergeants Major Academy in 1991, her 18th year of service.

From that point until her retirement in 2010, CSM Pritchett served in a remarkable series of demanding assignments, several uncommon for combat service support soldiers, which ultimately placed her among the most highly respected senior noncommissioned officers in the United States Army.  In 1993, CSM Pritchett deployed as the Command Sergeant Major of the 561st Corps Support Battalion to Mogadishu, Somalia in support of the United Nations humanitarian mission.  Her Soldiers were among the best trained in the UN force for the mission at hand.  In large measure because of CSM Pritchett’s preparation and training, the battalion suffered no loss of life during its deployment.

CSM Pritchett was then selected to be the Battalion Commander of the USA Sergeants Major Academy where she was responsible for both course and faculty development.  She was then selected to be the Command Sergeant Major of the Installation Command at Fort Belvoir, Virginia.  During this time, she was appointed to the Secretary of the Army Senior Service Panel on Sexual Harassment as well as the Army Military Representative to the Defense Advisory Committee on Women in the Service.  CSM Pritchett’s next assignment was Command Sergeant Major, Combined Arms Center and Fort Leavenworth, Kansas where she was instrumental in the development of the new Enlisted Common Core Curriculum for both field craft and leader skills Army wide.

CSM Pritchett’s next assignment was the culmination of thirty years of education, training, and experience when she was personally selected by Lieutenant General David Barno as the first Quartermaster and first female Command Senior Enlisted Leader of a combat command in a time of war – the Combined Forces Command – Afghanistan, US Central Command where she served with distinction for two years. General Barno called her the irreplaceable eyes and ears of two successive US theater commanders, interacting seamlessly with Americans, Afghans, and over a dozen coalition nations comprising Operation Enduring Freedom.  Her final assignment as Senior Enlisted Leader, US Army Element, and United States Central Command permitted her to bring her combat theater perspective to bear on future plans and policies.