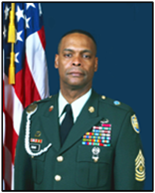 CSM Roman completed every level of the Noncommission Officer Education System culminating with completion of the United States Army Sergeants’ Major Academy, and the Command Sergeant Major Course at the National Defense University. CSM Roman has a Bachelor of Science Degree from Regents College of New York State.