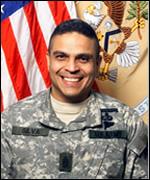 CSM Jose L. Silva enlisted in the United States Army on 15 July 1982 as an infantryman with the 82d Airborne Division; he converted to Petroleum Supply Specialist in July 1986.