Back to List
CSM Julius Small, Jr
Class of 2004 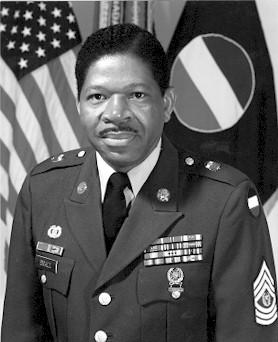 CSM Small was born in Savannah, Georgia, and enlisted in the U.S. Army in 1958 as a Supply Specialist. His 34 years of active duty service included three tours in Korea, two tours in Germany, and one tour each in Vietnam and Belgium, in addition to a wide range of Quartermaster positions across the continental United States.

CSM Small graduated from the Sergeants Major Academy at Fort Bliss, Texas, in 1977, and over the course of the next 12 years served as a senior Quartermaster Noncommissioned Officer at Fort Lee; in Wiesbaden, Germany; and Taegu, Korea. A Distinguished Member of the Quartermaster Regiment, his many awards and decorations also include the Legion of Merit with one oak leaf cluster and a Bronze Star Medal.

Among his many outstanding accomplishments CSM Small served as the first Commandant of the Quartermaster Noncommissioned Officer Academy here at Fort Lee. The foundation and standards he established in 1987 are still reflected in the high caliber graduates of the Quartermaster NCO Academy to this day.

CSM Small’s last active-duty assignment before his retirement in 1993 was as Post Command Sergeant Major at Fort McPherson, Georgia.