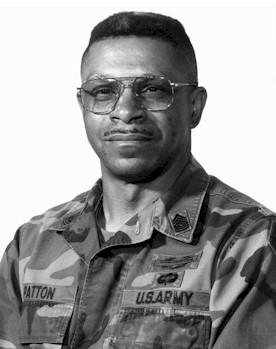 CSM Patton was born in Nacogdoches, Texas, and enlisted in the U.S. Army in November 1965. He completed basic training at Fort Polk, Louisiana, and advanced individual training at Fort Ord, California. He later completed airborne training, Subsistence Food Storage Course, instructor training, and the First Sergeant Course, and is a graduate of the Sergeants Major Academy at Fort Bliss, Texas.

CSM Patton served on active duty for more than thirty years, first as an Infantryman and later as a Quartermaster. His service included two years and three months in Vietnam with the 173rd Airborne Infantry Brigade and the United States Army Headquarters Area Command, Vietnam. He also served as a Supply Sergeant at the Company, Battalion and Brigade level, and as the NCOIC of Logistics Support, 800th Corps Materiel Management Center; as Command Sergeant Major for the 142nd Supply and Service Battalion in Wiesbaden, Germany; and Command Sergeant Major for the 23rd Quartermaster Brigade at Fort Lee.

In recognition of his outstanding career, following his retirement from active duty, CSM Patton was selected by The Quartermaster General in 1996 to serve as the third Honorary Sergeant Major of the Quartermaster Regiment.