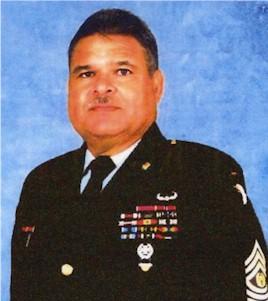 CSM Erazo entered the Army in 1971 at the age of 17 and trained as a Supply Specialist.   Throughout his career, CSM Erazo served in a variety of key positions at line units including the Property Book Noncommissioned Officer in Charge of the 3/5th Infantry, Fort Kobbe, Panama, Logistics Noncommissioned Officer in Charge, Mayaguez Campus, Puerto Rico, 1st Sergeant of HHC/A Company, 801st Main Support Battalion, Fort Campbell, Kentucky, and Command Sergeant Major, 4th Division Support Command (DISCOM), Fort Hood, Texas.  This unit was organized as the first digitized DISCOM in the Army with the responsibility to reorganize under a consolidated Combat Service Support structure, train and test new technologies under the Force XXI initiative.  CSM Erazo quickly became the subject matter expert in consolidated logistics operations and established a training plan which set the division up for success in its testing phase at the National Training Center.  It is because of his hands-on style of leadership, the DISCOM and Division were so successful.  CSM Erazo retired with over thirty years of service in 2001.