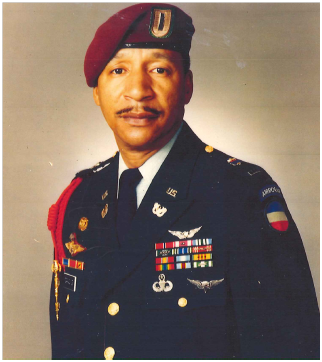 Chief Warrant Officer Four Bennie Manning, a native of Raleigh North Carolina, attended Saint Augustine’s College before enlisting in the United States Army in 1963.  After completing Parachute Rigger School at the top of his class, he was assigned to the 11th Quartermaster Parachute Support Company in Wiesbaden Germany. CW4 Manning reported to Yuma Proving Grounds Air Items Test Center where he served for four years before deploying with the 623rd/4th Quartermaster Company in Cam Rahn Bay Vietnam.

While at the Yuma Proving Grounds, he led on airdropping the Lance Missile on a wooden modular platform and witnessed development of the Army’s first static line deployed maneuverable parachute as well as the Low Altitude Parachute Extraction System. In 1971, CW4 Manning received a direct appointment to Warrant Officer and was reassigned to Fort Campbell to the 173rd Airborne Brigade following the unit’s redeployment from Vietnam. As the 173rd assimilated into the 101st Airborne Division, CW4 Manning was assigned as the Airdrop Platoon Leader responsible for the emergency resupply and heavy delivery contingency operations.

CW4 Manning was then assigned to Edwards Air Force Base where he served as the Army Materiel Command’s Technical Representative in development of the Advanced Medium Short Take-off Landing Aircraft; this initiative was the prototype for the C-17. This was an Army first to be involved in the first airdrops from a new aircraft. As CW4 Manning transitioned to the 82nd Airborne Division, he oversaw the rigging and out load of the Division’s equipment for more than 48 months. His efforts in rigging more than 4,000 platforms and air dropping 1,700 pieces of equipment produced the lowest malfunction rates in the history of the 82nd Airborne Division.