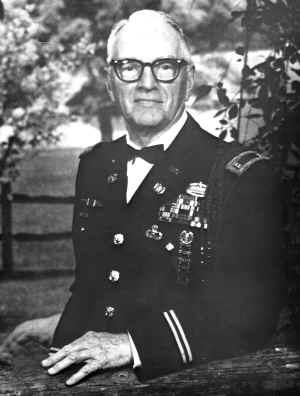 CW4 Melvin entered military service in 1942, volunteered to be an Army Paratrooper and graduated from the Airborne School that same year. CW4 Melvin received his commission in 1949 and graduated from the Rigger School in 1953. He served in various positions around the world to include assignments in Austria, Korea, Japan and Thailand. His military service spanned over 31 years.

CW4 Melvin holds the distinct Army honor of being the only Quartermaster to have made five combat mission jumps as a Parachutist. From July 9, 1943, to September 17, 1944, he participated in four combat parachute missions while assigned to the 505th Parachute Infantry Battalion, 82nd Airborne Division. The missions were in Gela, Sicily; Salerno, Italy; Ste. Mere Eglise, France; and Nijmegen, Holland. He made his fifth combat mission jump on February 22, 1967, at Katum, Vietnam, while assigned to the 173rd Airborne Brigade.