Back to List
CW4 John Ashley Ward
Class of 1994 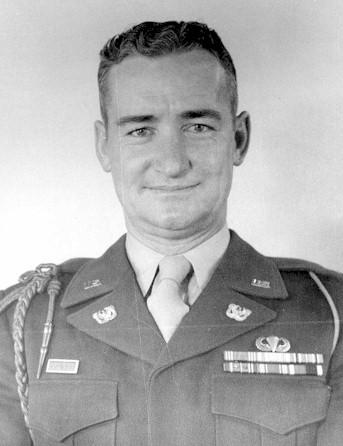 CW4 Ward was born on 19 September 1910, in Watkinsville, Georgia. He joined the United States Army on 19 November 1932 as an Infantry private. He served with the 5th Infantry Division in China from 1935 through 1939.

On 1 July 1940, CW4 Ward volunteered to join the original Parachute Test Platoon being formed at Fort Benning, Georgia.  He was one of 48 Enlisted Soldiers selected from over 200 volunteers from the 29th Infantry Regiment. This was the Army’s first parachute unit, designed to validate parachuting as a military technique. Three months shy of his 30th birthday, he was the oldest member at the time the platoon was organized. The cutoff age was 30. Ward went through eight strenuous weeks of training before his first jump.

CW4 Ward was the seventh jumper in the Army’s first official parachute jump on 16 August 1940. This parachute jump was primitive by today’s standards, there were no ground panels, ground-to-air radios or smoke on the drop zone. Members of the Parachute Test Platoon pioneered methods of jumping that are still in use today. CW4 Ward became Airborne qualified before there were parachute wings, jump boots, jump pay or any of the familiar trappings of today’s paratrooper.

He helped form the 502nd and 504th Parachute Battalions, which were later expanded into Regiments. During the period of January to August 1941, he designed and fabricated the A-6 and A-7 aerial delivery containers. He served in World War II as a Parachute Maintenance Officer with the 504th Parachute Regiment, 82nd Airborne Division. On 4 February 1943, he was commissioned as the Army’s first Parachute Rigger Warrant Officer.  Ward served with the 82nd Airborne Division in Sicily, Italy, Nijmegen, the Netherlands, and occupation duty in Berlin.

In 1947, Ward was assigned to the Airborne Service Test Section, Field Forces, which became today’s Airborne and Special Operations Test Directorate.  During this time he was responsible for the development of heavy drop techniques for delivery of supplies and equipment. CW4 Ward was instrumental in the fabrication and design of the General Purpose Container and the Individual Weapons Container. He played a major role in the development of the T-10 parachute assembly.  He also served as the Operations Officer for the Board and was charged with responsibility for scheduling aircraft for tests.

He served as Fort Bragg’s Post Quartermaster from 1953 to 1955. In 1953, he organized the first Air Items Repair Shop for the XVII Airborne Corps.  During this period, he revised the methods of parachute repair and saved the Army $50,000 in labor and equipment costs.  It is interesting to note that he also performed additional duties as Post Property Disposal Officer and Mortuary Officer.

From 1955 to 1960, CW4 Ward was assigned to the 9111th TU Quartermaster Research and Development Command, Natick Massachusetts and stationed at the Parachute Branch Equipment Lab, Wright Patterson Air Force Base, Ohio.  He monitored test programs conducted jointly by the Army, the Air Force and a contractor.  CW4 Ward performed duties normally assigned to someone with an advanced degree in Engineering.  Also during this tour, he developed the A-22 Aerial Delivery System.  This system can be used for both Container Delivery System drops or for external helicopter sling loads.  CW4 Ward retired from military service on 19 April 1960.

CW4 Ward continued his service to the nation as a civilian technician, starting in May 1960, when he was employed by the U.S. Army Natick Research, Development and Engineering Center in Massachusetts.  Here he helped to develop and test personnel airdrop equipment.

During his 12 years as an Equipment Specialist at Natick, CW4 Ward provided much of his field experience to airdrop projects.  Two of his most memorable projects were the development of the Parachute Troop Harness with the Capewell Canopy Releases and the Anti-Inversion net for Parachute Canopies.  The Parachute Troop Harness with the Capewell Canopy Releases allowed the paratrooper to jettison the parachute canopy after landing.  This kept soldiers from getting injured or killed when being dragged in high wind conditions.  The Anti-Inversion net for the T-10 parachute kept the parachutist from rotating over the canopy upon descent from the aircraft.  Both of these items were Type Classified and are still in service today. Ward retired from Government civilian service in June 1972 after 40 years of combined military and civilian service.

During his career, Ward made a total of 858 parachute jumps between the two careers; more than 300 as a civilian technician.

CW4 Ward passed away at the age of 87, on 17 January 1998.  His funeral was held at the 82nd Airborne Division Memorial Chapel at Fort Bragg, North Carolina.  He was buried with full military honors in Cumberland Memorial Gardens.